Meth Use Statistics in Washington State

Admittedly, it is easy to be fans of that television show “Breaking Bad.” It is smart and sometimes funny, but there is nothing smart or funny about what is happening in Washington related to the manufacture and sale of methamphetamines. Washington State drug rehab facilities have an influx of people caught up in the terrible cycle that the drug causes.

This article examines what is happening in Washington State regarding the use and abuse of this drug. What do the trends indicate? Why does methamphetamine have such a strong presence in the state? Where can residents of Washington State go to deal with meth addiction?

Methamphetamine Use by The Numbers

Meth works in the brain to increase feelings of well-being, but as soon as the drug wears off, brain chemicals like dopamine fall so low that the user experiences intense cravings for the drug. Eventually, the drug user is incapable of feeling any pleasure without it. Over time, the amount of the drug needed to produce the euphoria found in meth increases, requiring the user to seek more and raising the risk of overdose exponentially.

This is how meth addiction works, and Washington State drug rehab facilities are filled with people attempting to regain their health and sobriety after using the drug regularly.

Trends show meth deaths in Washington State are rising fast, along with deaths from other drugs. 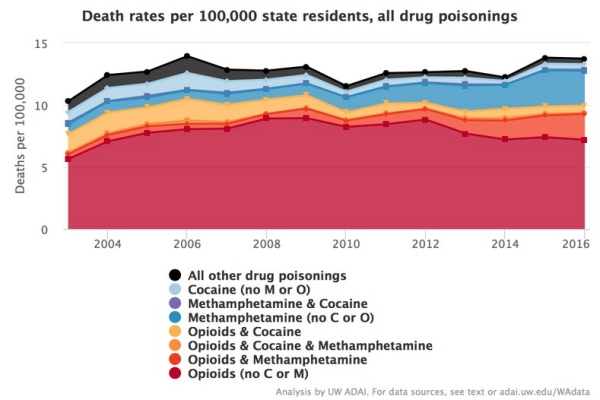 METH ALONE OR INVOLVED IN OVERDOSE WITH OTHER DRUGS IS SKYROCKETING IN WASHINGTON STATE (SOURCE: UW ADAI).

Meth is created from common household chemicals and over-the-counter cold remedies. When combined, these chemicals are highly toxic when ingested. Meth labs are backyard chemical manufacturing facilities where DIY drugs are “cooked” and sold. Washington State has a high incidence of these labs found in homes, barns, sheds, motels, and even in the woods. Cooking with these chemicals creates a high volume of toxic waste and the risk of explosions and fire are extremely high.

Mexican drug cartels have also been peddling their wares in the state; according to the Inlander, the U.S. Drug Enforcement Administration (DEA) seized 250 pounds of meth in Washington State in 2010 and 600 pounds in 2014.

The University of Washington Alcohol & Drug Abuse Institute (ADAI) has been tracking an upward trend in the number of deaths from meth poisoning. The rate of deaths per 100,000 include:

Many of these deaths are tied to opioids, as well; that is when drug users take a “speedball,” a potent mix of depressant and stimulant. The theory is that the depressant effects of opioids like heroin will offset the jittery high that comes from meth. Unfortunately, all this does is increase the chance that the user will overdose. By county, drug deaths involving meth are highest in Gerry County, followed by Wahkiakum and Grays Harbor. Meth drug labs are found most frequently in Cowlitz, Lewis, and Grays Harbor, according to ADIA statistics.

The ADAI fact sheet from May 2018 shares these sobering facts:

A January 2018 article in MYNorthwest points out that the number of deaths from meth is about double that of opioids – and it is growing. That is in part because Western Washington is in the I-5 corridor, a conduit for Mexico and Canada’s biggest illegal import – drugs.

Washington State addiction treatment resources for meth users and their families have been handling the influx. The article went on to share that more than three-quarters of the people whose main drug was heroin are also using meth. While drug use has stayed relatively the same for years, use of meth has been spiking.

Even the New York Post is reporting on Washington’s meth problem; a recent article told the story of the latest drug bust in Olympia, where authorities seized more than 50 lbs. of meth this May. According to the article, another 126 pounds of meth were seized from a home lab.

A Jefferson County meth fact sheet spells out the highly addictive nature of the drug. The effects of meth include:

The effects of meth on the community include an increase of crime and environmental harm from meth lab production. Meth users pursue the drug to the detriment of everything else, including pets and children. The costs to the healthcare and prison systems are high.

The good news is that there is help to be found in Washington State drug rehab. These facilities offer a number of treatment options, including:

If you or any of your loved ones are stuck in the cycle of meth addition, there are resources throughout the state to help. To learn more about admissions, contact us.