Statistics from the latest National Survey on Drug Use and Health show the extent of the nation’s struggle with drug misuse. It’s not stopping, despite national and regional efforts to curb opioid addiction. How does Washington State compare to the rest of the country on opioid drug misuse?

SAMHSA Reports Widespread Drug Misuse in the US

The 2017 National Survey on Drug Use and Health tracked legal substances such as tobacco, alcohol and prescription medications, as well as illegal substances. While the misuse of alcohol, binge drinking and tobacco usage all cause health problems including death, statistics on the illicit use of opioids is particularly striking in this report.

The Substance Abuse and Mental Health Services Administration (SAMHSA), which sponsored the report, defines opioids as including: prescription medications used to treat pain such as morphine, codeine, methadone, oxycodone, hydrocodone, fentanyl, hydromorphone and buprenorphine, as well as illegal drugs such as heroin and illicit potent opioids such as fentanyl analogs (e.g., carfentanil). 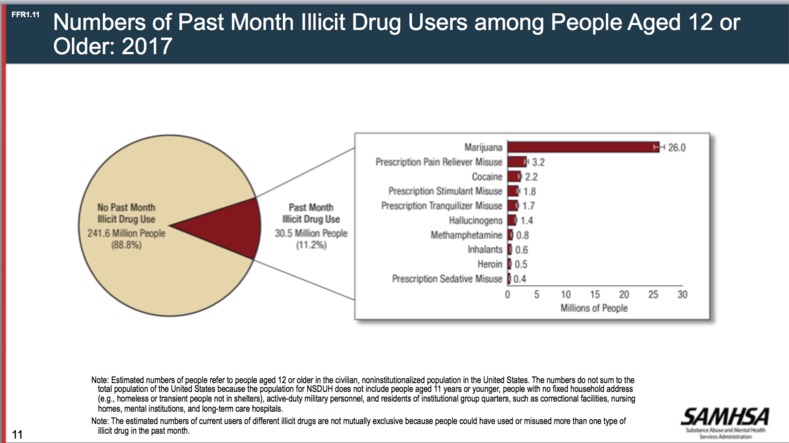 SAMHSA report shows the scope of legal and illegal opioid abuse in the United States.

It appears drug addiction tied to opioid misuse is not going away in this country anytime soon. The national statistics from the report showed:

According to the study, 1 in 13 Americans needs addiction treatment in a clinical setting. That equates to around 20 million people in 2017 alone. However, only four million people actually received professional treatment that year.

These numbers illustrate the negative impact of drug misuse on the nation. Further, a large number of people with substance use disorder related to opioids are not receiving the needed help to treat SUD.

Washington State has in no way escaped the ramifications of national opioid drug misuse patterns. The University of Washington Alcohol & Drug Abuse Institute spells it out plainly, “Opioid use, morbidity and mortality have increased nationally and across Washington State.” They quote crime lab data showing a 134 percent increase in opioid use from 2014 to 2016 in Washington State.

Treatment for opioid use is also another leading indicator of the state’s increasing struggles with prescription and non-prescription drug misuse. Data shows these numbers doubling since the year 2000.

The Center for Disease Control (CDC) comments that local, state and national efforts to stem the use of opioids must include: “effective, synchronized programs to prevent drug overdoses will require coordination of law enforcement, first responders, mental health/substance-abuse providers, public health agencies, and community partners.”

With these statistics in mind, it is clear that more needs to be done to curb the increase in opioid misuse and to help those struggling with substance use disorders. If you or any of your loved ones need help, now is the time to get it. Contact The Recovery Village Ridgefield today to how to access treatment options locally.